Chapter 5: A Shade of Green(permalink)

It's next Wednesday, and the morning, which is a piece of shit. I hate it when it's the morning. When it's the morning, I want to drag time outside by the ear and give it a good yelling-at. "Time! What's wrong with you time?! Why do you have to be the way you are?! You know that what you do is considered harassment in some states. Did you know that? And discrimination! Yeah, I could have the feds up your ass faster than, well, you Time. Faster than you. Now go mow my lawn!"

Anyway, while eating my Frosted Alec Baldwins, I do my morning thing of checking up on all my online personas: Rose@Facebook, rose@Twitter, rose.eros@gmail, flick-rose@Flickr, ... all the slightly different versions of myself that I've fit into the arbitrary molds imposed upon me by product designers, sitting in their offices, wondering what I want (and why I don't click on any of their stupid, ugly ads). Yeah, so anyway, remember how I posted this a few days ago? 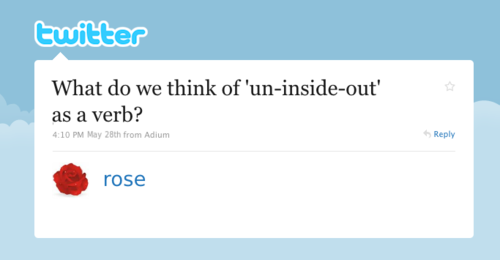 Well, suddenly I have a new follower (which makes five non-spam followers total) named "senbrella," and she has this to say: 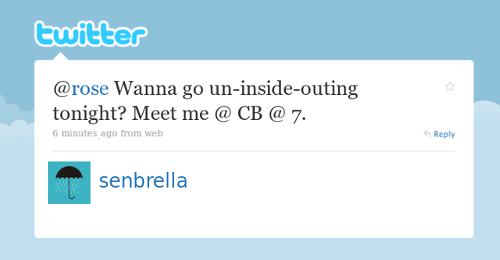 Created by:
THE Benjamin (local modifications)

Thank you, Internet, for being totally creepy in a anyone-who-tries-hard-enough-can-find-out-anything-they-want-about-you-if-you-make-your-username-tied-to-your-real-name-you-stupid-girl type of way. And, yeah, great, I spend enough time now Googling her that my Frosted Alecs look more like Frosted Nixons. You know what, Time? I'm revoking your privileges. Your privileges are hereby revoked. ... Which privileges? Your privileges of existence.

You know how sometimes your mind is elsewhere, and you just kind of start following some routine, or like walk alongside some person you're used to walking alongside, and suddenly you're in this meeting that you belong in, and you're trying to make it seem like you meant to go there, so you're all like, "Hey, has anyone seen my bag here? It's got a T-Rex on it." only then, it turns out that you're carrying your bag, and everyone's looking at you like "Is it okay to laugh at her, or is that too unprofessional?" and then makes the inevitable "last place you look" joke, and you're turning all bright red, and then when you try to back out of the room, you run into the light switch, which turns off all the lights, except for this one laptop, the power chord of which you accidentally get tangled into while you're trying to turn around to turn the light switch back on without knocking your bag (which is completely noticeable now, thanks) into anybody, only when you trip over it, you knock into them anyway, and it's this like really senior person, so you're too busy apologizing profusely to him to notice that everybody (him included) is looking at the smoking wreckage of the laptop, and when you finally do see it, you lean down to help clean it up, only to realize that you're basically sticking your butt into senior person's face, and of course, your gut reaction to surprise is to lean back, and now you've got this, like, super important woman's face in your butt, so naturally, you start thinking about your butt, and anytime you start thinking about your butt, you have to poop, and, needing to poop just adds this whole new, physical, level of stress to this entire situation, so your heart starts racing, and nobody's doing anything, because they've never seen anyone buttify someone so important before, much less two women buttifying each other, and then one of the guys, some ass hole, starts laughing, and you're basically crying and really need to poop, so your innate run-the-fuck-away-from-danger mode takes over, and your bag smacks once more in to Senior Lady, and you kick in the screen of the laptop, and basically trip all over yourself, but keep running, and you only look back once, to make sure that nobody's chasing after you, which of course means that you don't see this folding table that was set up with a bunch of lemonade, and you run straight into that, knocking lemonade everywhere, and not just on you, but - it turns out - into a room of electrical equipment the door to which had been opened only moments before for maintenance, so now the entire building's electricity is going down, and you're reeling on the floor, which is when you realize that you're naked? Well, ending up at Concurrence Bowls was something like that.

Sen is waiting just inside, at one of those tables they keep around for the non-bowlers (people who come for the bad food or because bowling is becoming a premier spectator sport), and she's wearing... is that a half-dress, half-space-suit?

She says, "Finally! I've been suffocating in here!"

I (!!) say, "Maybe that's because your space suit stores air like a fire stores wood... Ineffectively."

She says, "'Hey, Jimmy. Where do you want me to store this here valuable wood?"

I say, "'The valuable wood? Better keep that shit in the fire!'"

She says, "Halloween costumes are all manner of cheap during non-Halloweening times."

I say, "Us going to a Scrabble night dressed ridiculously."

I say, "Us going to a Scrabble night dressed ridiculously."

She hooks my by the arm and says, "Come on! Part of you totally wants to go into the ladies room right here, become the space goddess you were born to be, and transform a droll Wednesday Scrabble night into the event of everybody's life!"

She says, "Come on, Repetitious McQueen. Let's get you dressed!" and she starts fake pulling me into the bathroom.

You know that moment, when you're about to enact a plan that sounds good in theory when you're really excited and maybe a bit drunk but in real life is completely infeasible and will make you look completely ridiculous, and you realize that this plan is completely infeasible and will make you look completely ridiculous? Sen is completely incapable of feeling this emotion, apparently. She's practically humming (no, wait, she is humming) as we knock on the door, looking like Trick or Treaters who are not only fifteen years too old to be doing this now, but also somehow mismanaged their calendars so thoroughly as to arrive not only in the wrong month, but in the wrong hemisphere of months, and not only on the wrong day, but in a month that doesn't even have 31 days in it. Basically, it looks like we lost a bet, and that bet was life.

A teenage boy opens the door. He's dressed like a non-idiot in black jeans and a gray hoodie that reads, "Feed the Cobra. Bite the Monkey."

He blinks at us several times.

He looks behind him.

Sen says, "Hello, Earth Ranger! We are here for Scrabble!"

And, he moves out of our way.

Sen says, "Is it your people's customs to doff footgear in your entrance plaza, or shall we do the customary of applying them to your smell-to-electricity device."

Sen says, "I find your monosyllabicity of utmost enchantment, being. It is quaint in the way that my home language of grnknortktuk is not."

The bright redness of my cheeks is itself turning bright red, from a complete overflow of embarrassment.

When we enter the living room, there are about ten people there, four on a carpet, two at a table, and another three leaning at a coffee table. The teenager says, "Hey, Mom. The newcomers are here."

A woman who was leaning at the coffee table stands. She says, "Oh, wonderful!" and then she turns and says "..." (or something along those lines) before recovering and saying, "We have you two sitting at the table there. Feel free to grab any snacks you see lying around, and... can I get either of you something to drink?"

Sen says, "Your generosity has perhaps spared your planet from destruction, but no, I myself need refreshment only from my inner fluids, which form a cleaning cycle using technology not unlike your..." She pretends to think. "... your Brita Filter."

I'm trying to duck inside my own ridiculously oversize collar. But, the woman, despite all her better judgment, turns to me to await my response (all the while thinking, "What possible thing can I do to force these people to leave without offending anyone? Maybe I should 'accidentally' start a fire...").

The woman sighs almost inaudibly and says, "Great. Well, let's get back to it. You're playing with Greenfin The Magnifarious and Rhonda."

Made available under the Creative Commons Attribution License

If you see this, please ignore everything from here on out on the page. (It's for people who have CSS and JavaScript enabled. [Which isn't you.])