I have this vague inclination, this gut-feeling, that there's something bothering her.

I think I'm a pretty intuitive person, you know? I think I can just read people.

She (pacing) says, "It's... fuck!... it's not your fault. Damn police. I swear to fucking God!" She points at the ceiling in an angry manner.

Call it a talent. A gift. A way of being.

She says, "I bet that ass is on the take. I bet he's just swimming in the fucking kickbacks now."

Call it my gift back to humanity for making me so perfect in every way, for making me, like, the quintessence of perfection.

Man, poor old number six. How are you gonna be taken seriously if you're always sexting everything? (And, seriously, there has got to be some kind of slang meaning for "sexting.")

Stan says, "Ah, you are so young, Rose. Like a baby ermine."

Sen says, "I'd ermine that fucking cop. That's what I'd do!"

I was fifteen when I first sexted. I was discovering my phone, and with it, my sexuality.

Sen says, "I'd ermine him into his fucking grave. That guy would have a fucking fur trap."

Sen says, "Then I'd ermine his fucking grave, too. I would eat that shit. Carve a curse with my fucking teeth is what I would do."

It was with Christopher. We met on AOL, and oh, I was so enchanted. This was before smart phones, you know, so I sexted him with the @ sign, and he sexted me using an &. We used to sext until 3:00 sometimes 4:00 in the morning.

Sen says, "'You Ass,' that's what I'd write. And nothing else. See, too much, and the fucker gets a story."

And then, one day, he sent me an electronic mail, and he had created a web page with a picture he took of his face. He'd gone to all this trouble to use the family camera and then scan it in at school. And, oh God, I thought, this is serious. This guy wants to take sexting up a notch. This guy wants to sext as people.

Sen says, "No, I want people to wonder how he could be such a fucking gigantic ass that someone would take the trouble to carve 'You Ass' onto his grave."

So, I had to break it off with him; I had to tell him, "Listen, Christopher, I like sexting with you a lot, but, I'm not really looking for a sextfriend, you know? Especially not one who lives in New Zealand."

And, then Christopher started sexting with :( faces, and I had to say to him, "Listen, man, there are plenty of other girls to sext with, and guys too. This is the Internet age. This is the age of sextation. Just go to sextown."

Gully says, "No, but even getting your name mentioned as suspicious..."

Sen says, "And, you know what?, I don't even know if pig sex is all that much worse. At least that you can make sense of, not like this fucking ass-factory of a cop we got here."

What I'm saying is that I think "sext" is a funny word.

Sen says, "You know what's worse than that ass-planet? You know what's an ass-sun? An ass-galaxy? Our luck. Our luck is like a ass-fucking-Universe."

Though portmanteauing sex with just about anything is a barrel of iguanas. Like a sexpatriate, some sexfoliating, and maybe a day at the museum sexhibit. Hee hee hee.

There is a pause.

I bet one of the fucking cops joined a sexting meetup, and now they've got this whole sexploitation blackmail shebang going on, and they're slowly sexchanging all of this guy's incriminating photos for data.

They look at each other.

Old Finn Mac Cool is the best cop in town. He is twice as tall as crime and three times as strong. He stops seventy crimes a night and spends mornings frightening children away from a life of crime, simply by looking at them. He once picked up James Bond and used him as a towel. Only, Finn Mac Cool is addicted to sexting. Only, Finn Mac Cool brings his enormous fingers down upon the tiny keyboard of a tiny phone and uses the tiny camera to attempt to fathom his mammoth body. And, like his life as the forefront of the fight against crime, he leads his sexting life to its fullest. He takes thousands of pictures daily. He sends them to half the planet. 80% of Internet traffic is pictures of Finn Mac Cool. A Finn Mac Cool is a unit for measuring bandwidth.

The most impressive fact about Finn Mac Cool is, despite the enormity of him and of his sexting, nobody else in the department has any notion of his second life. He spends his afternoons pushing against the tide of information with enormous force and handily keeping it at bay. A part of this effort, the only part of his life that can possibly cause him even a moment's pain (something as foreign to him as string theory must be to a piece of string), is to bribe an insignificant web company to keep their insignificant mouths shut.

They only want power over Finn Mac Cool, for the ability to brag to their grandchildren, the grandchildren they will not have because Finn Mac Cool will pulverize their genital area when he finds them in real life.

There is a pause.

She walks over to her backpack and pulls out a large folded up piece of paper from it.

She says, "So... we've been looking into all of the other groups, and we've discovered a few things. First, the Friday night sci fi TV group? They spent, like, half their evening plotting how to get more members. Most of the other sci fi groups were the same. Even the other groups: yoga meetups only let you go to downward facing dog if you brought someone new; skeeball meetups give you a lead ball if it's your third time without a friend; the volunteer firefighters meetup almost set Stan on fire when he couldn't guarantee he'd be back."

Sen says, "Basically, everyone's desperate for new recruits, and there's nobody new coming in, so people are starting to act out... irrationally. For example, Stan did some excellent sleuthing and currently believes that the group that created "Minigolf Courses Late Night B&E" is a faction of increasingly dangerous meetup members trying to clear out the other groups to increase membership in their own. They used all fake usernames, but Stan was able to determine that they call themselves, 'the Them.'"

Stan says, "Actually, I made that up."

Stan says, "Great. This is all marvelously useful information for getting new members..."

Sen says, "Yes, well, so that's basically the problem. Now, I took the liberty of creating a small map of the current meetup.com landscape." She lays out the page on the coffee table in front of us. (I hadn't even noticed: nobody ever turned on the TV.) It looks like: 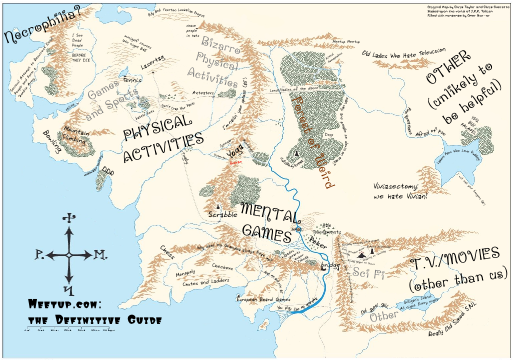 She pulls a pointer out of her pocket and stretches it out slowly. She says, "Yeah, so this here is us." She points at US. "And, this here is everybody else." She points to everybody else. "As you can see, everybody else is way bigger than us. Way bigger, way more mountainous, everything. (The mountains signify clout.) Basically, what we're looking at here is Serenity Vs. the Alliance, Luke Vs. the Empire, Doctor Who Vs. the futuristic trash can. What we're looking at here is everything we've ever seen before, over and over again, what we've seen beaten, over and over again. We've basically been training ourselves for this, and, a month-long probation for Rose aside, I think that we can do it!"

She looks at each one of us.

Made available under the Creative Commons Attribution License

If you see this, please ignore everything from here on out on the page. (It's for people who have CSS and JavaScript enabled. [Which isn't you.])